This past weekend was full of favorites for me and Mike. We spent the weekend at Resort at Squaw Creek in North Lake Tahoe. We stayed at this resort for the first time last year and got upgraded to a “fireplace suite.” Whoever upgraded us should get some sort of promotion because the resort has become a home away from home for us during the past year! And – not to be bougie – buuuuut if we had stayed in a regular room* that first time, I don’t think the weekend would have made such a lasting impression on us. Now, we splurge for the suites and, let me tell you, having a fireplace (and a stove, a toaster, a master bedroom and 2 TVs) in your hotel room, never gets old! 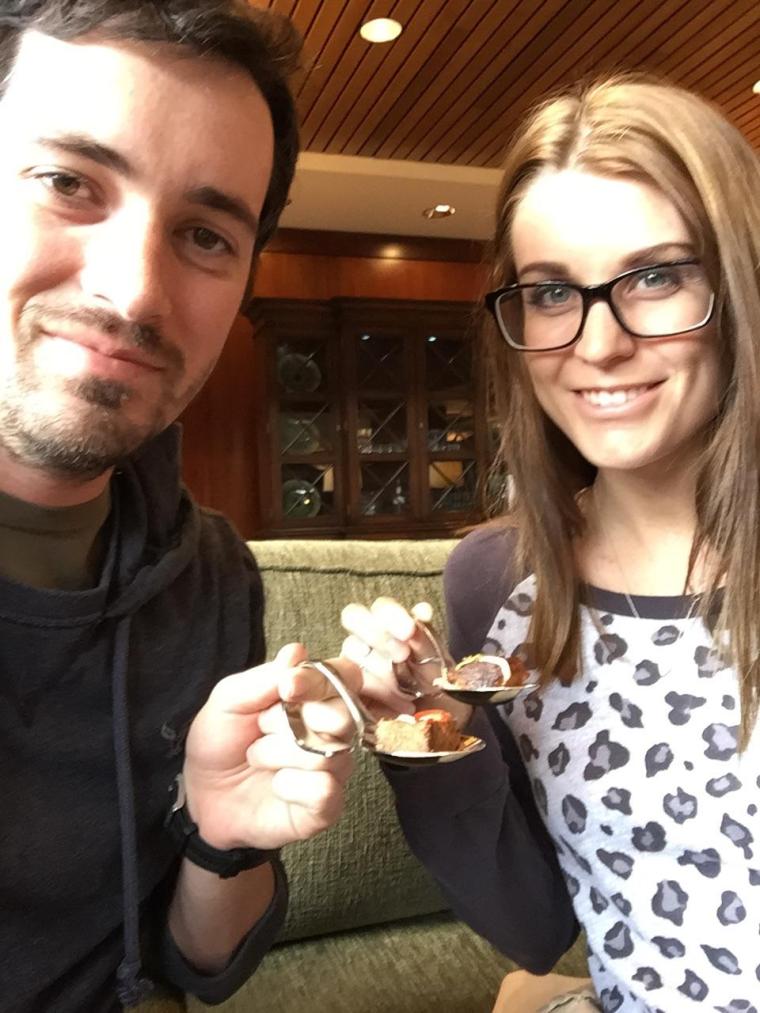 Aside from staying at the resort, we partook in a pretty amazing food crawl. If you don’t know what a food crawl is (like many of the waiters and waitresses who wanted to be sure we only wanted a salad… for both of us… to split…), it’s when you “crawl” from eatery to eatery having your appetizer, salad, soup, entree, dessert, etc. all at different restaurants. Food crawls are great because they allow you to sample a lot of different foods, especially on vacations when there are so many restaurants to try! (Note, they do get a little pricey with the tipping included at each new place but I think it’s worth the experience.)

We started at the welcoming event the resort offers on Friday evenings with beer and app samples and then went to the pub located on the property. Here we each ordered a cocktail and decided on the pretzel bites with jalapeno cheddar (for me) and spicy mustard (for Mike) dipping sauces. From past experience (you might remember when I wasn’t eating meat in March and ordered these same pretzel bites for dinner), I know these are delicious so it was hard to get just the half order but we knew we have to save room for the rest of the evening!

Next we took the free shuttle service to The Village and stopped at a bar(?) called 22. If I’m being honest, I have to say this was my least favorite stop on the crawl. We split a steak salad with fennel and beets. I enjoyed the salad but the atmosphere, in my opinion, was lacking. It felt a little old world and stuffy… (and I thought it smelt weird but Mike didn’t feel the same so, who knows?) After our salad, we went to another pub (this one Irish) and ordered the potato skins and sliders which were amazing! We ended our food crawl with a pear tart at a pizza place (not photographed) and a nightcap back in our suite!

The next day, we took the tram to the top of the mountains where there was a pool, hot tub, cafe, bar, and a mini-museum from the 1960 Olympics that were hosted at Squaw. At the cafe we split 3 appetizers (another good way to try a lot of different things!!); the bruschetta with an avocado drizzle, a flat bread with spinach, figs and a balsamic glaze, and BBQ wings. I had higher hopes for the flat bread and the bruschetta – which were both just okay – but the wings were the bomb.com and Mike gave me the last/uneven extra one so ya know, I fell in love with him all over again, type thing.

For dinner (I fell in love, yet again;), Mike treated me to a fancy-schmancy steak dinner at Six Peaks, the resort’s restaurant. We started with a cheese and meat sampler that I could have had all to myself and called it a meal. We also ordered/split (do you see a common theme here?) a rib-eye and a fillet with truffle mashed potatoes and asparagus. Seriously. So. Good. And last, but not least, we ended the night with my FAVORITE chocolate covered Oreo’s with mini M&Ms on top (I don’t even like Oreo’s in real life, but put me on top of a mountain, charge Mike $4.50 per Oreo, and #bliss).

So, to recap, obviously my attempt to stop eating meat during The Veg Voyage has been derailed (steak salad and wings and rib-eye, oh, MY!) but you know what they** say………………….. Oreo’s are vegan.