Squaw Valley is mine and Mike’s “spot.” It’s about a 4.5 hour drive from our house and the perfect getaway. We used to make it up there multiple times a year but now it seems we only get up there once. I’m not complaining though! Even one weekend a year to disconnect from the outside world and reconnect as a couple is great; especially in magical Squaw Valley.

We’ve been going up there for so long, we have our own little traditions in place. This past trip incorporated our favorite things to do (of course) but we also explored a lot of new things too. We even got extra fancy this time and took a day off from work to enjoy a nice, long 3 day weekend together.

We arrived late on Thursday night and basically unpacked and went straight to sleep. On Friday we woke up early for our first activity of the weekend; hiking! Side story: we got permits to hike Half Dome this August so we’re trying to do a lot more hiking in the next few months to prepare. With this in mind, I picked the hardest hike Squaw has, Shirley Cannon Trail. As a bonus, we were able to get some altitude training while up there, which isn’t a possibility at home.

The weather predicted rain and thunder storms around 12pm so, after a quick bowl of oatmeal in our room, we started out on the trail at 8:15am. The original plan was to hike up and take the gondola down* but things didn’t work out that way (#foreshadowing). On past Squaw trips, we’ve taken the gondola to the top and spent the day hot tubbing, eating, and drinking champagne. What a different plan it was this time! 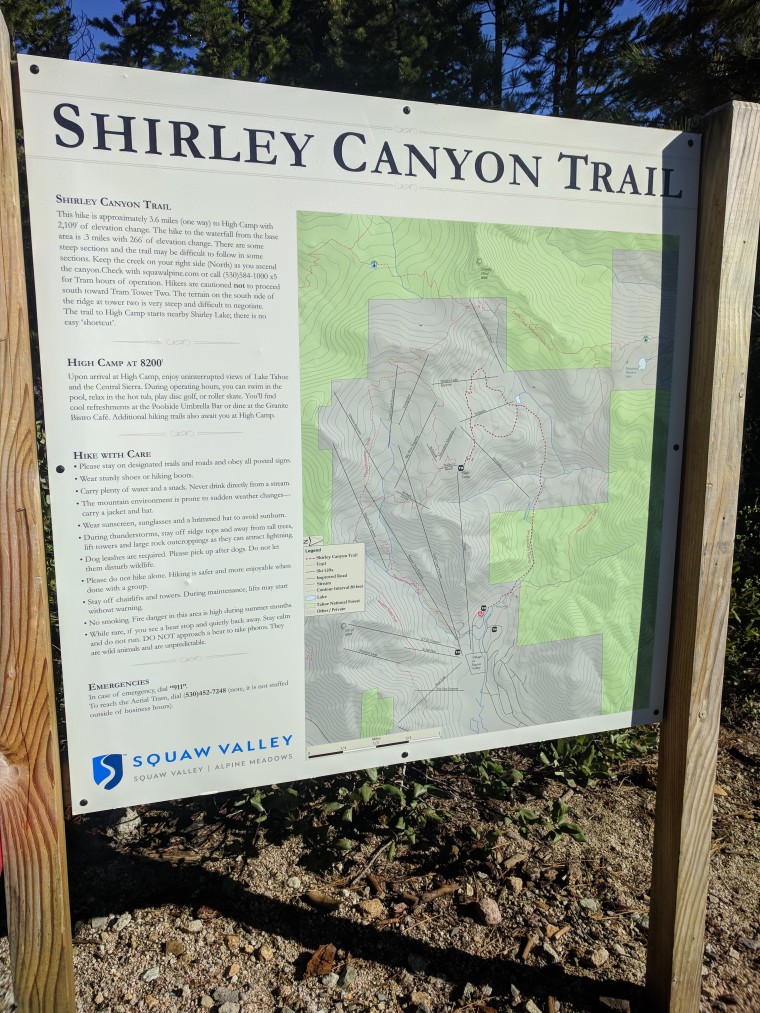 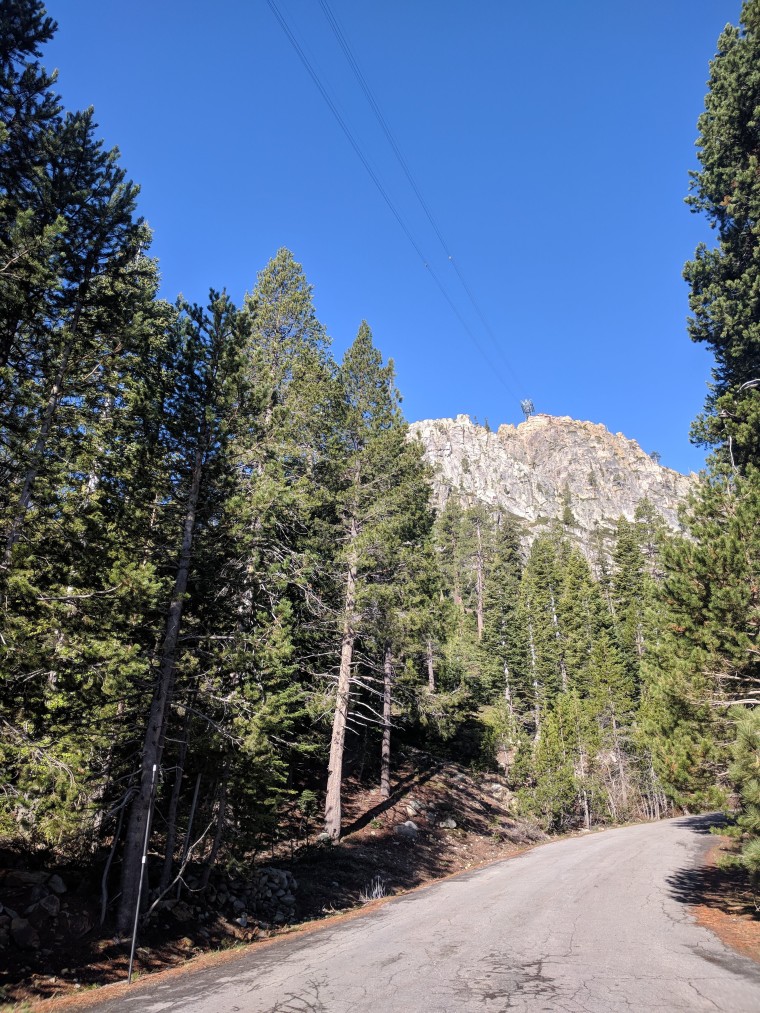 The Shirley Cannon Trail hike is no joke. It’s gorgeous but strenuous. You cross multiple streams, see a few waterfalls, and have to actually boulder quite a bit. No lies, the altitude started to get to me once or twice and I had to stop to rest. But overall I was impressed with my fitness and feel less anxious about Half Dome.

Unfortunately there was still a lot of snow at the top of the trail and, given it looked like it was going to rain and we were on slabs of granite, we turned around before making it to the top. WHICH MEANS we had to hike down too. Not the original plan. Plus, to top things off, one of my contacts fell out about halfway down. Not ideal. Nonetheless, we made it back down just after 12pm and promptly treated ourselves to a brewski and lunch. 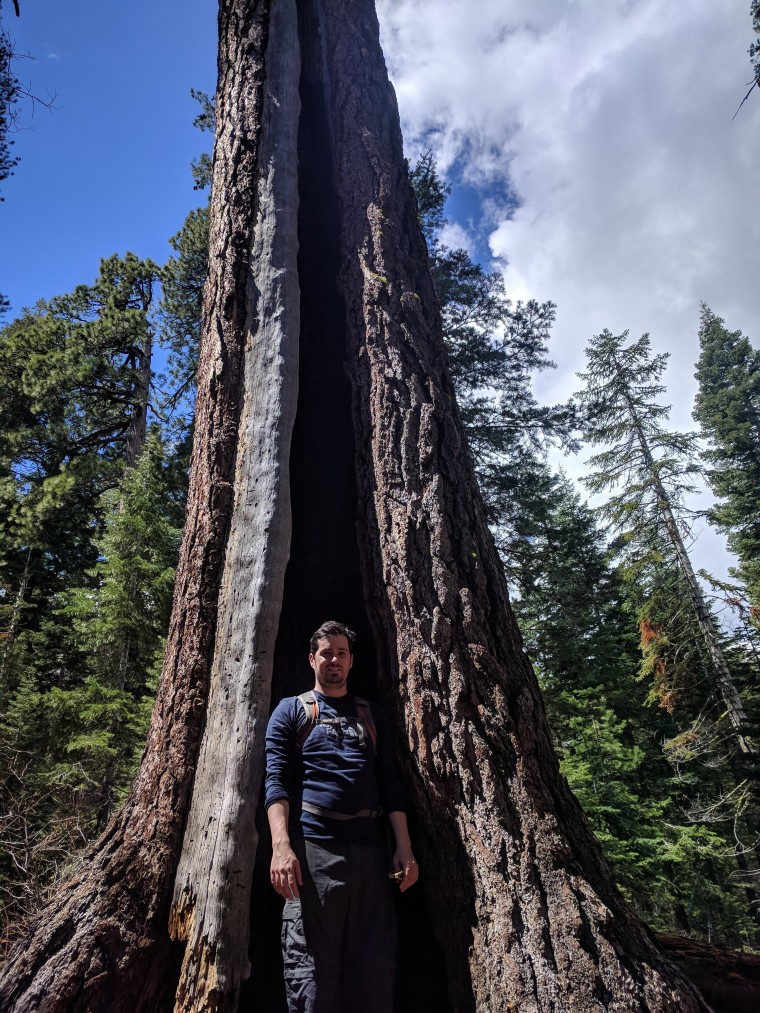 We intended to take a quick 40 minute catnap when we got back to the hotel but slept for a hour and 20 minutes instead. I wasn’t mad about it though… I think our bodies needed the rest.

After snoozing, we hit up the hot tub and got caught in a little rain storm. But who cares when you’re already wet? Squaw has the best hot tub scene, with 3 different Jacuzzis and a giant pool. All that and a gorgeous view of the mountains. It’s not a bad way to spend an afternoon…

Before our dinner reservations, we had time for a glass of wine and a little Royal wedding watching. Correction: I watched updates on the wedding. Mike could not care less. Who else is obsessed with MM like I am though? 🙋 She’s so gorgeous and an American/Californian. I had to support. 😉

After my history-in-the-making fix, Mike treated me to a cozy dinner at Six Peaks. We spilt a bottle of red, an order of lobster mac n’ cheese, and indulged in fillets. It was such a nice night. There is just something about splitting a bottle of wine that is so romantic to me. AND we got to toast the official less-than-a-year countdown to our wedding! 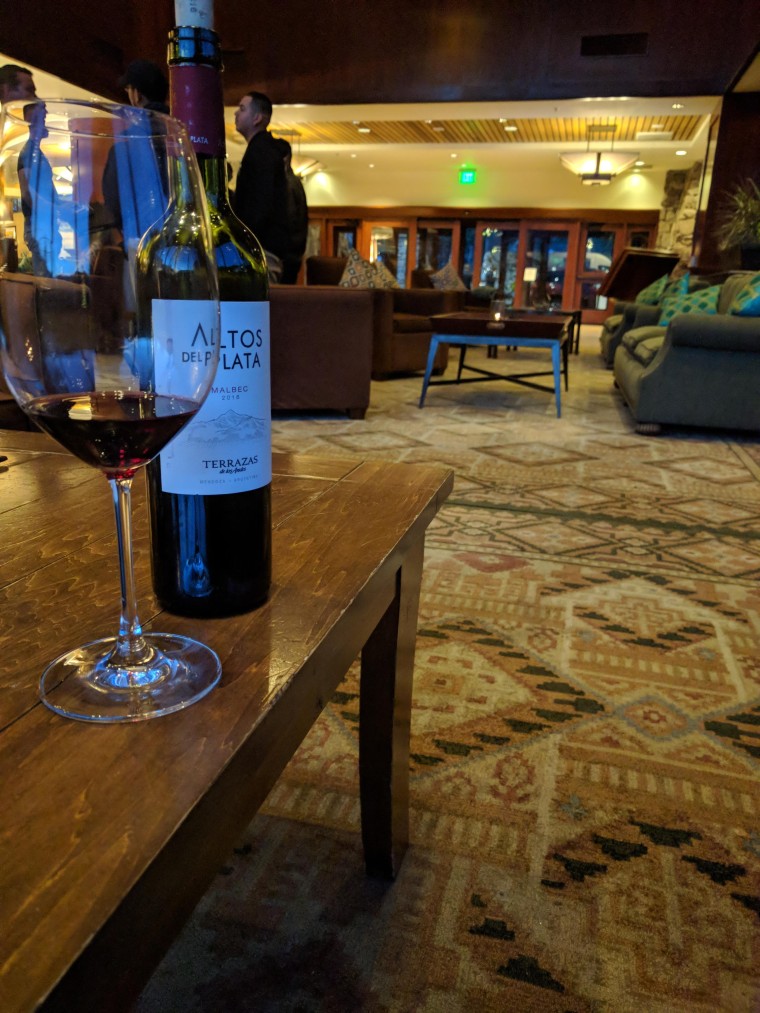 On Saturday we had a big adventure planned. But first, COFFEE (and tea and breakfast sammies). Wild Cherries in Truckee and is my favorite local coffee spot. I am a picky coffee drinker and have never been disappointed with their java. They also have made-to-order sandwiches that are hot and fresh every time. I may need to start a campaign for them to open a location in the Bay Area…

AND THEN it was adventure time. We drove to Tahoe Treetop Adventure Park in Tahoe Vista for 2.5 hours of zip-lining and swinging around in the trees.

For $60 you get to explore 9 different obstacle courses up in the treetops. You are harnessed in while you try things like walking across rolling logs or rock climbing on a suspended wall. There are also zip lines sprinkled throughout each course. I was a little nervous at first because you have to jump off to start zip lining and don’t have anything to grab onto but your harness. After a few tries though, you don’t even think about it.

Mike and I completed all 9 courses (and one twice, by accident) so we were pretty proud of ourselves. I highly recommend trying this if you’re in the Tahoe location. The same company has 2 other parks and I’m sure we’ll be back for more. 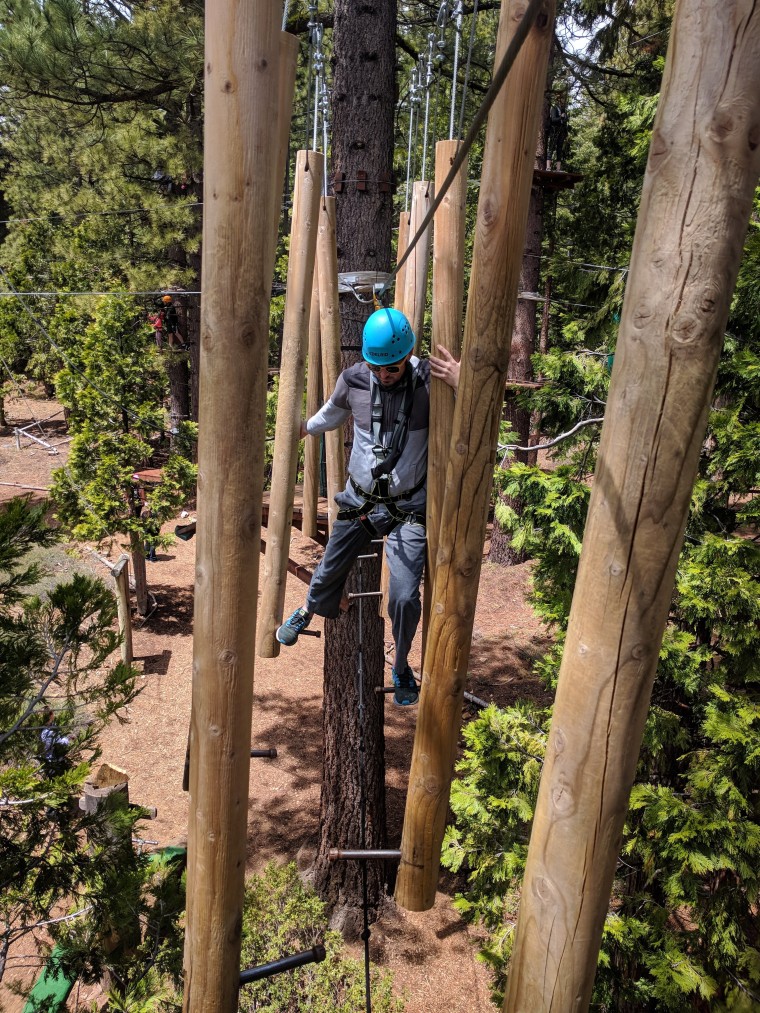 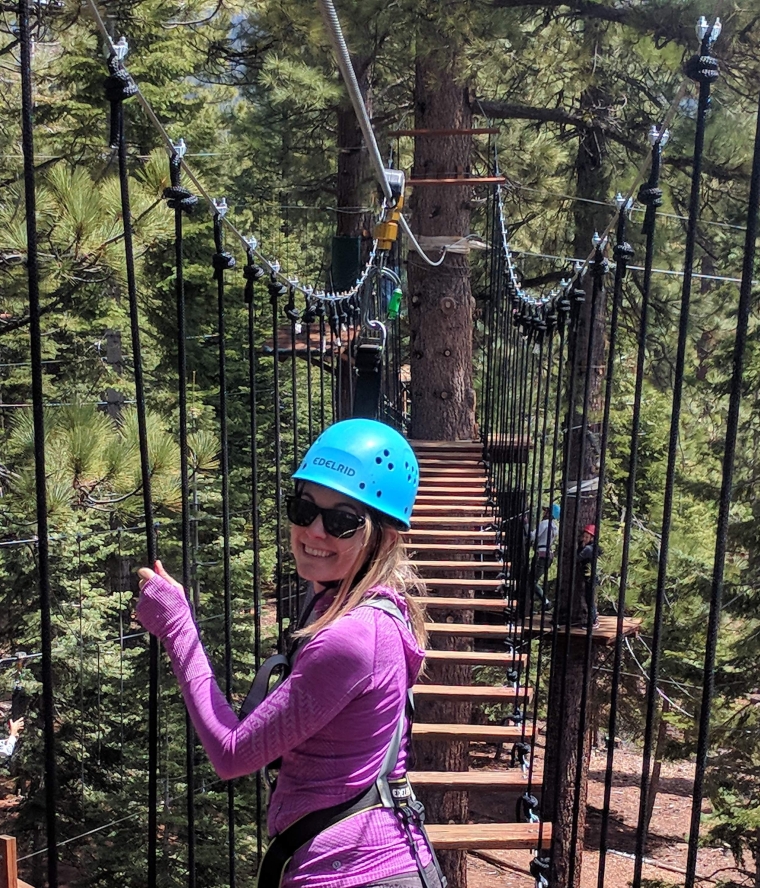 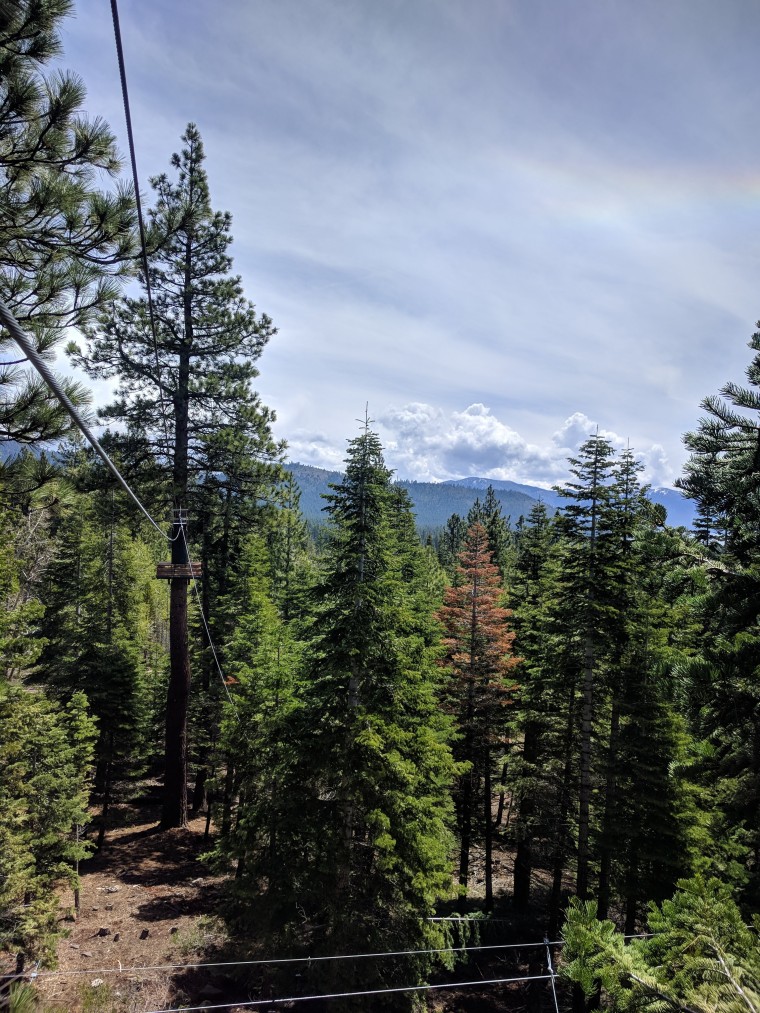 After our treetop adventure we scarfed down quinoa (for me) and orzo (for Mike) vegetable salads that we had bought at New Moon, a health food store next to Wild Cherries. Then it was a quick drive back to Squaw for some relaxation in the form of a couples massage.

Now that we are engaged, on vacations like this, I think about how in few years we might have a little babe with us; and vacations will likely look a lot different! hah 🙂 But for now, it’s still just me and Mike and we can indulge in things like bottles of wine, hour long adventures, and massages.

We hit up Sandy’s Pub in the resort after for beers and sweet potato fries. I have good memories of Sandy’s including basically sneaking in a bottle of wine to drink with my future mother-in-law a few years ago; to actually sneaking into the hot tub outside the restaurant another time with my friend Sandra and eating at Sandy’s after. Not to mention all of the times Mike and I have been there. ❤

We spilt a pizza and a salad after and then, perhaps proving that we are ready for parenthood, went back to the hotel to chill for the rest of the night. Oddly enough we found an interesting documentary on the Weather Channel (of all channels) and proceeded to learn all about the Donner Party. Not a super romantic topic… ek 😐

On our final morning in Squaw, we continued a tradition we have that involves a mountain view, tea, and hot tubbing. Who doesn’t love hot tubbing right in the morning when their the skinniest they’ll be all day?! Jk.

Then we spilt a chocolate croissant (hot tub before you eat, I’m telling ya;), packed up, and said ✌️ to Squaw; our favorite home away from home.

A sweet life it is. 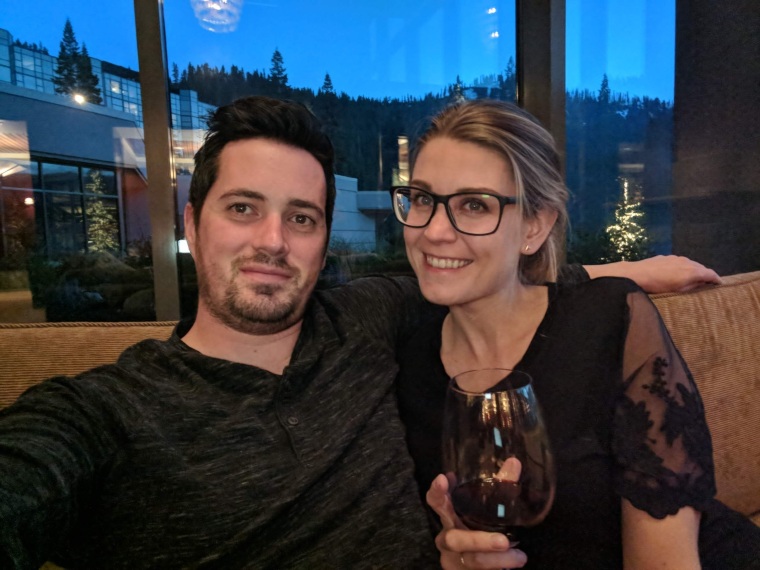 *Mike was actually going to PROPOSE last year when we had the same plan but we didn’t end up hiking that trip. Instead he proposed a few months later in the sweetest, most perfect way. Spoiler: the day included hot tubbing, apple picking, wine tasting, and of course, a very special question. 🙂