Last Saturday was arguably the best day of my life so far! After a long first week at my new job (yay!), I was more than ready for a weekend away with Mike. He had previously planned to take me to San Luis Obispo for my birthday and – the one thing I requested? – I didn’t want to make a single plan for the weekend.

Mike not only planned the funnest weekend with my favorite things (clearly should request his planning more often!) but surprised me with the best question I’ve ever been asked (spoiler #1). 😉

We drove down on Friday night and got settled into our cozy airbnb. We turned in early in anticipation of a full day ahead. On Saturday, we woke up earlier than expected and had a few hours to kill before our brunch reservations. Of course my first thought was, COFFEE! Mike Googled coffee shops and found a gem called Ascendo. It was a gloomy morning and I enjoyed a cafe au late with homemade almond milk before heading to our favorite place in SLO for brunch; Luna Red. 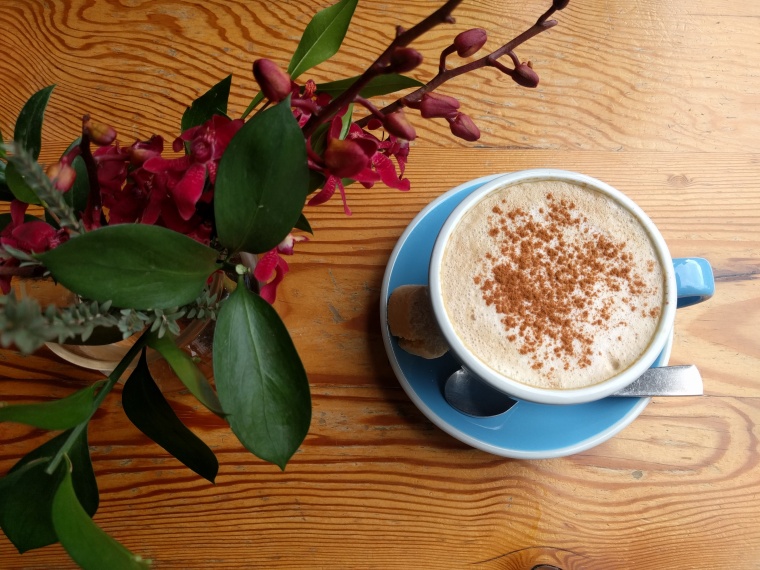 We enjoyed mimosas and spilt an order of eggs Benedict and an egg sando. I mention this all of the time on the blog but I absolutely love that Mike is, more often than not, willingly to spilt two dishes with me so we can sample more.

Lucky me that I get to spend the rest of my life with him (spoiler #2)!

Our next item on the agenda wasn’t until later in the afternoon so we decided to go check out the landmark Madonna Inn. Two words; Holy pink. 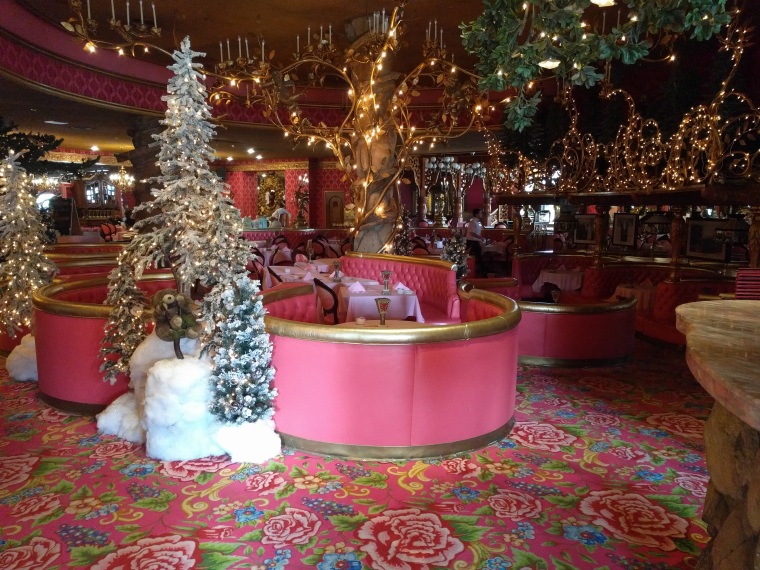 This place is insane. Pink and roses are the theme and… I really don’t know what else to say about it… Aside from the fact that I made Mike go into the iconic men’s restroom and take a picture of the waterfall urinal. Happy wife, happy life (spoiler #3, kind of….).

After experiencing enough pink for a lifetime, we made an impromptu trip to the beach. In classic Ashley form, I was craving kombucha.

Booch on the beach, what’s better?! 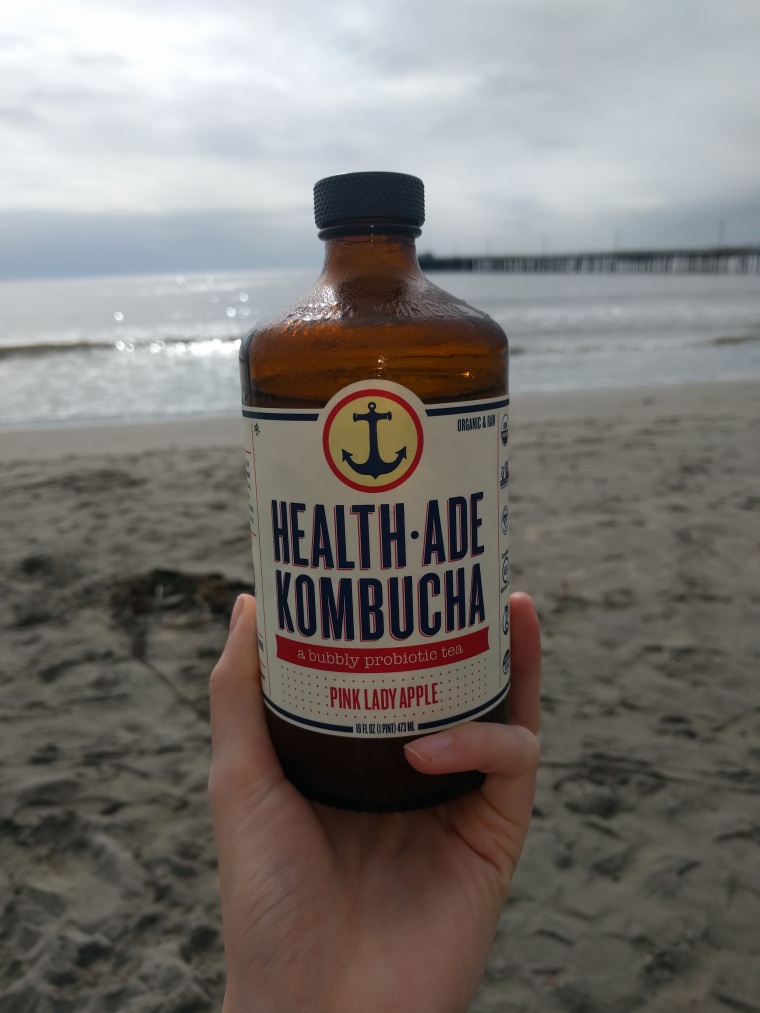 We strolled in the sand, sharing sips of fermented tea, before finding a swing set ON THE BEACH. Best idea ever. 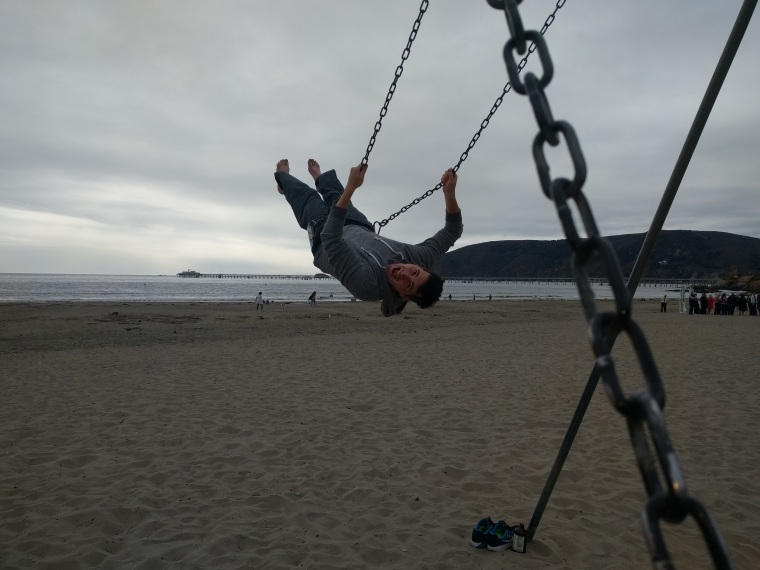 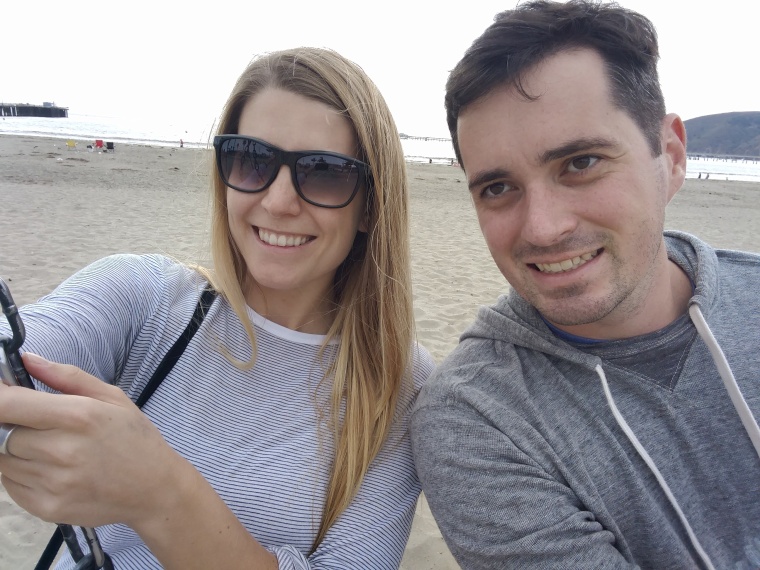 Then it was a romantic trip to the Sycamore Mineral Springs. Now, if you know me and Mike, you know we love to hot tub. At this point, I remember thinking how great the day was so far. Little did I know how much better it was going to get…

After the hot tub, we were getting a bit hungry but Mike had something else planned that closed within the hour. We were debating nixing his original plan and grabbing a glass of wine and tacos instead but, when he told me what was planned next, I immediately opted for a quick snack to stick with the plan.

After all, WE WERE GOING APPLE PICKING!

Pretty much every fall I tell Mike how much I want to go apple picking but it just hasn’t panned out. So, you can imagine my excitement when Mike told me we were finally going. I was downright giddy. Also, bonus points that the orchard was an organic one.

We arrived about a hour before closing. It was drizzling out. I was already euphoric. The lady working there advised us to go deep into the orchard for the best apples. This worked out perfectly for Mike’s plan.

I was seriously so excited to be there picking apples with Mike I could barely handle it. I was taking millions of pictures in between picking the tiniest apples I could find. I don’t know what it is but, baby apples just taste better! Mike kept joking that I wasn’t letting the apples “grow to their full potential” by picking them when they were so small and all I kept saying was I didn’t care! I think they taste better small.

After about 20 minutes rummaging through the trees to find the best apples, Mike pointed out one with a plethora of BABY apples. I immediately walked up to it and started ranting about how great tiny apples were. I was picking them like a mad women. One-two-three in my palms, ready to go for more when I heard Mike.

Shit, I thought, he’s going to be mad that I keep picking these baby apples instead of leaving them to grow to their full potential.

I turned around with a guilty look on my face ONLY TO FIND MIKE DOWN ON ONE KNEE.

Omg, I will remember that image for the rest of my life. It was the sweetest thing I’ve ever seen. I instantly started to cry. He asked me to marry him. I told him to stand up. I hugged him. I cried more. He asked again. I sobbed, “yes, yes!”

He put my gorgeous ring on that special finger. I cried some more. And all of the sudden I was done apple picking. I was overcome with all of the emotions. I could barely believe Mike had just PROPOSED in the most Fall-style, Ashley-inspired way.

After the ring and the tears, Mike told me wine tasting was next and I was like, HELL YES LET’S GO! I don’t think my smile faded for the next hour.

We paid for our apples and went to Edna Valley Winery for wine and cheese and smiles and shamelessly telling everyone we just got engaged (and yes, we got our tastings comped;).

We bought 2 bottles to enjoy with family and then it was time for dinner!

I barely remember what I ate or what we talked about. All I remember is thinking, I can’t believe I get to marry this guy! Our day was full of all things we love and, like I mentioned, included the best question I’ve ever been asked.

It’s been such a fun week telling our families and friends that we’re ENGAGED!

Of course, I’ve also loved showing off my ring that was designed and made by our gorgeous and talented friend Altana Marie. The ring is perfect and 100% me.

I knew I didn’t want something as traditional as a diamond ring. This is personal preference but I really hate what a status representation engagement rings are. I knew years ago that I didn’t want to subscribe to the notion that my engagement ring should be “3 months pay” or some other marketing scheme like that.

Despite thinking insanely pricey engagements rings are a waste of money, I do love the symbol of them. It’s said that the Greeks decided on what we now know as our “ring finger” because, allegedly, there is a vein that goes from that finger straight to our hearts.

I MEAN, HOW ROMANTIC IS THAT!?

Logistically, I wear black almost everyday so felt a black diamond was more fitting for me personally. Plus, as mentioned, it isn’t as traditional; which Mike and I are always fans of.

We don’t have any idea about wedding plans (so don’t ask about dates;) but we’re excited for this next step in our relationship. It sounds so corny but I feel like our love and relationship has deepened and intensified just in this past week alone.

On that note, cheers to our future!

2 thoughts on “Best day ever”