In classic California fashion, we spent the weekend exploring beach towns here in the Bay Area. We visited both Half Moon Bay and Santa Cruz, exploring a mix of touristy and local things.

Mike’s parents arrived from Toronto on Friday and before beach bumming it, we kicked things off at B Street and Vine in downtown San Mateo. This place is a local Bay Area gem with the best bruschetta around.

On Saturday, after coffee and a light breakfast, we drove to Half Moon Bay. Our first stop was back to Dad’s Lunchonette for burgers, beers, and mac n’ cheese. Just like the last time Mike and I went to Dad’s, we took it to-go and ate on the beach across the street at Half Moon Bay State Beach. True to NorCal weather, it was a windy but the sun stayed shinning throughout the afternoon; making for a nice day!

After we ate, we played a few rounds of Kubb (Barb and Dan beating us 2/3 games). Next up? A nice beach stroll where we found a flock of baby seagulls, proving that everything is cute when it is a baby and small!

After our walk, we drove to Half Moon Bay Distillery for a FREE tour. HMB Distillery is a small craft distillery run by a husband and wife. Ulli gave our tour and she was great! Now thinking about it though, the tour was actually more of a talk. It started with a introduction video explaining how her and her husband started the distillery. Then she told us all about vodka and gin – how they were made and the key differences between them – following it up with tastes of each.

I was a big fan of their gin so we ended up going home with a bottle. I also just love to support local and small businesses. Plus, since the whole thing was free, I’m glad we bought something at the end. If you’re ever in Half Moon Bay, I recommend checking it out.

We ended the night back in the south bay at one of mine and Mike’s favorite restaurants, Orchard City Kitchen.

On Sunday we started the day at The Mystery Spot in Santa Cruz. This place is a little touristy but at $8 a ticket (and $5 to park), it’s a fun, reasonably priced thing to do. Plus, the drive there is beautiful under all of the California redwoods.

The Mystery Spot claims to be “a gravitational anomaly.” You’re able to do all of these weird things like stand a table and lean off of it without falling (pictures below). It is only a 45 minute tour – that’s pretty cheesy with a lot of punny jokes – but I think it was worth it. 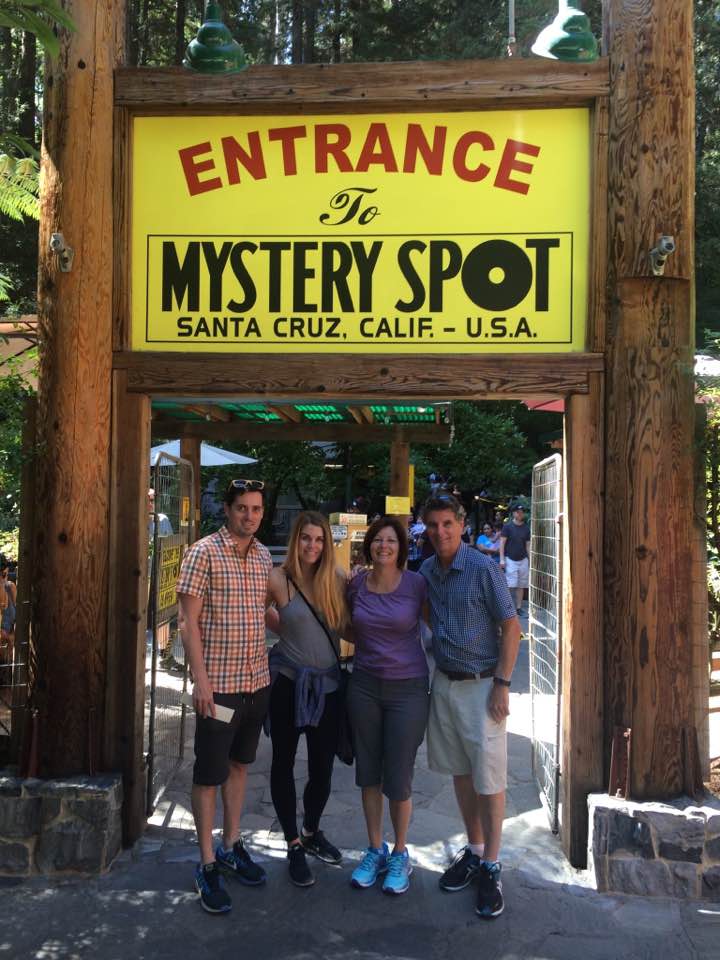 After The Mystery Spot we drove to downtown Santa Cruz. One of our favorite thing to do as a couple is go to the Tea House Spa, where you can enjoy a hour spa and a hour massage for only $180. Such a deal! We didn’t do this with Mike’s parents but there is a cool beer place nearby that we usually go to after the spa called Lúpulo Craft Beer House. We decided to stop there first for beers and a meat and cheese plate. It was a nice day out so we were able to sit on the patio and enjoy our brews and noshes.

After we walked to Mike’s favorite place in Santa Cruz to stock up on cookies at Pacific Cookie Company. Typically I rather go for something else indulgent (like a really good cheese or wine!) but even I have to admit, the cookies are delish here.

We ended the day at Pour Taproom on the main strip in downtown. Mike and I have been there before and think it’s a cool idea. There aren’t any bartenders here but, instead, you serve yourself with selections of different beer, mead, and wine to pick from. One huge wall is lined with all of the taps and you can do a “taste” (2 ounces), a “flight” (4 ounces), or a full glass. You’re given a bracelet to wear that tracks your pours to pay at the end.

I think we each tried about 4 different beers while playing a game of parcheesi, which is about the longest game ever. We actually ended up leaving before we finished. Then it was time to head back over the hill to go home.

Tired but happy from a good weekend, we curled up and watched Lady Gaga’s new special on Netflix, Five Foot Two, in our new spacious office!