The week after Portland I flew to Chicago for work. Oh, what a town! The food scene there is like nothing I’ve experienced before. Every.single.thing. I ate was delicious. I probably came home a few lbs heavier but there are no regrets (just mourning for the yummy pasta and pizza and burgers and burrata (so much burrata)).

I touched down Tuesday evening and immediately meet my manager/friend for dinner at the hotel we were both staying at, The Ace Chicago. Inside, we found an equally chic and cozy restaurant called City Mouse, where we split an order of grilled carrots, burrata, fried artichoke, and octopus. 😋 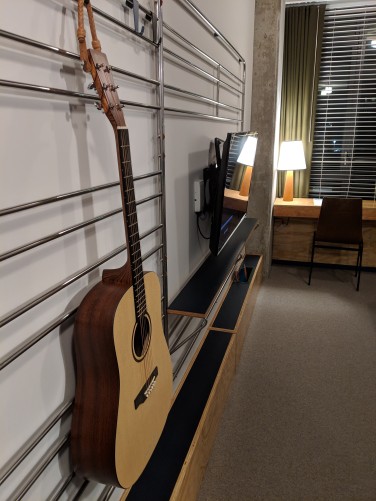 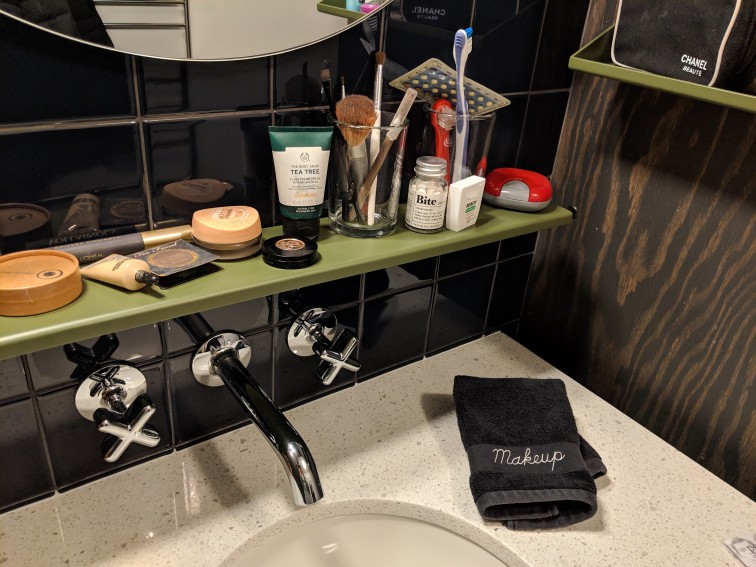 We had a productive working session as a team on Wednesday, complete with another yummy lunch. That evening I got to try RPM Italian, Bill and Giuliana Rancic’s restaurant. This might not be cool to say, but I love celebs. I’m not into reading trashy magazines about them but I do like following my faves on instagram and going to their restaurants when I can!

In theme with Chicago itself, everything I had at RPM was delicious. We started with the Giuliana salad (will have to recreate), and an order of the burrata and fried artichokes. For our main meals, we tried the lobster ravioli and the chicken parmesan. The standout for me was how good and fresh the pasta was that came with the chicken parm. In all honesty though, the whole meal was carb-y, cheesy bliss.

Ok, so aside from all the nom food… it was COLD in Chicago. I know, I know, when I went it wasn’t even as bad as it is going to get BUT this California girl was freezing nonetheless. That night I actually went to bed thinking, well at least it isn’t snowing…

And, of course, guess what I woke up to on Thursday morning… snow.

We spent the day working from City Mouse; with a pretty view, hot tea, and cozy soup and a grain bowl for lunch. Not too shabby! 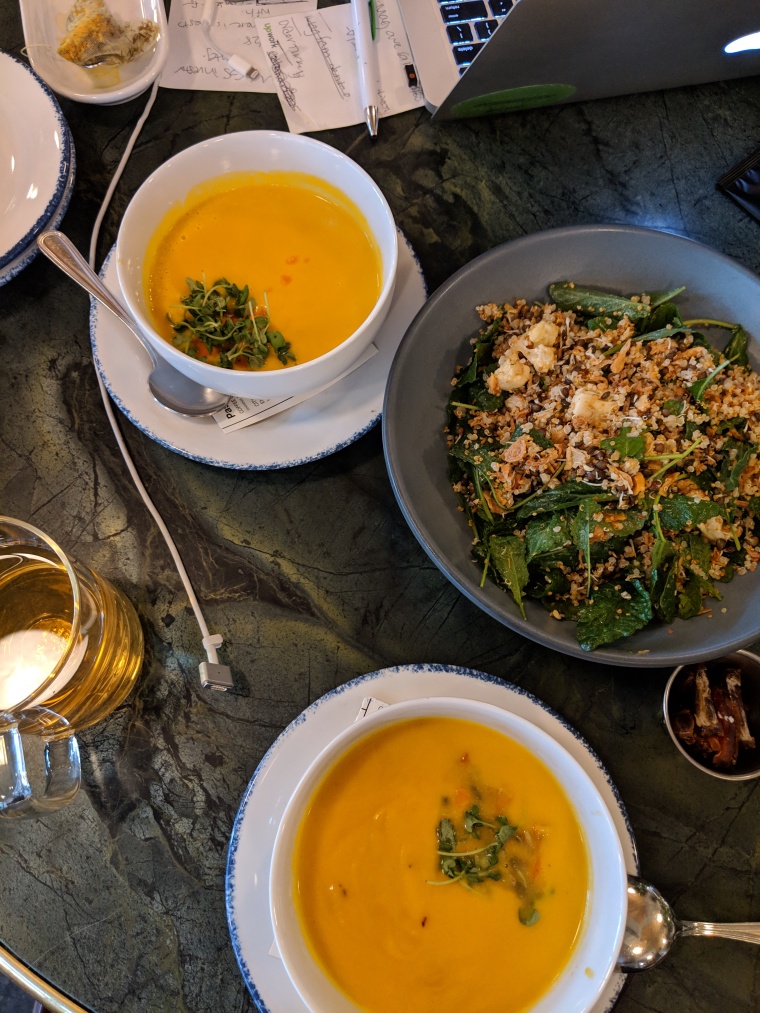 I worked a half day on Friday and then MIKE ARRIVED! Our first stop was the bean (or Cloud Gate). I don’t know why I’ve always wanted to see this landmark but there is just something appealing to me about that steel shaped giant bean! It was so cool to see it in person. Next time I’m in CHI, I’m making another stop here but in the early morning when it isn’t so crowded.

Also, it was freezing…! So we left after about 5 minutes. Hmm.. maybe a summer trip is in store? 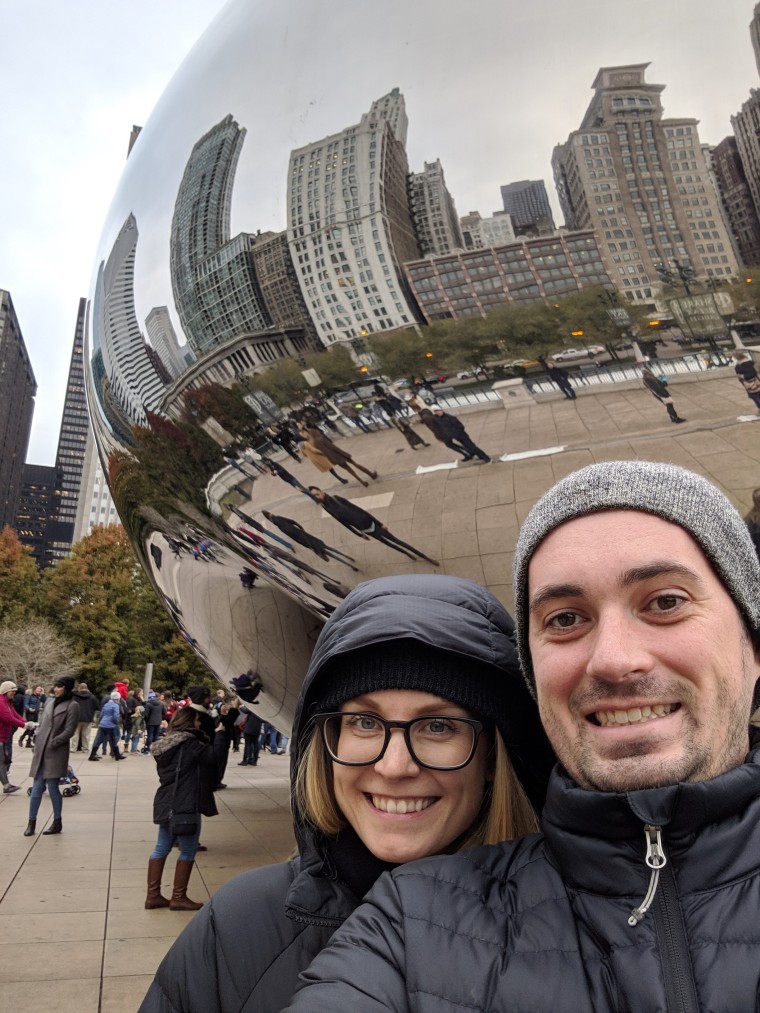 Next up was a drink at Cindy’s in the Chicago Alethic Association Hotel. Cindy’s is a convenient ~5 minute walk from the bean. We didn’t have a reservation (I learned resos are key in CHI) but luckily were able to slip into two seats in the back.

This is another place that seems like it would be cool in the summer, with their rooftop patio and gorgeous views. Although there was a fire pit outside, we opted to stay indoors. The cocktails at Cindy’s were good but the company was better. It was good to see Mike after a few nights away! 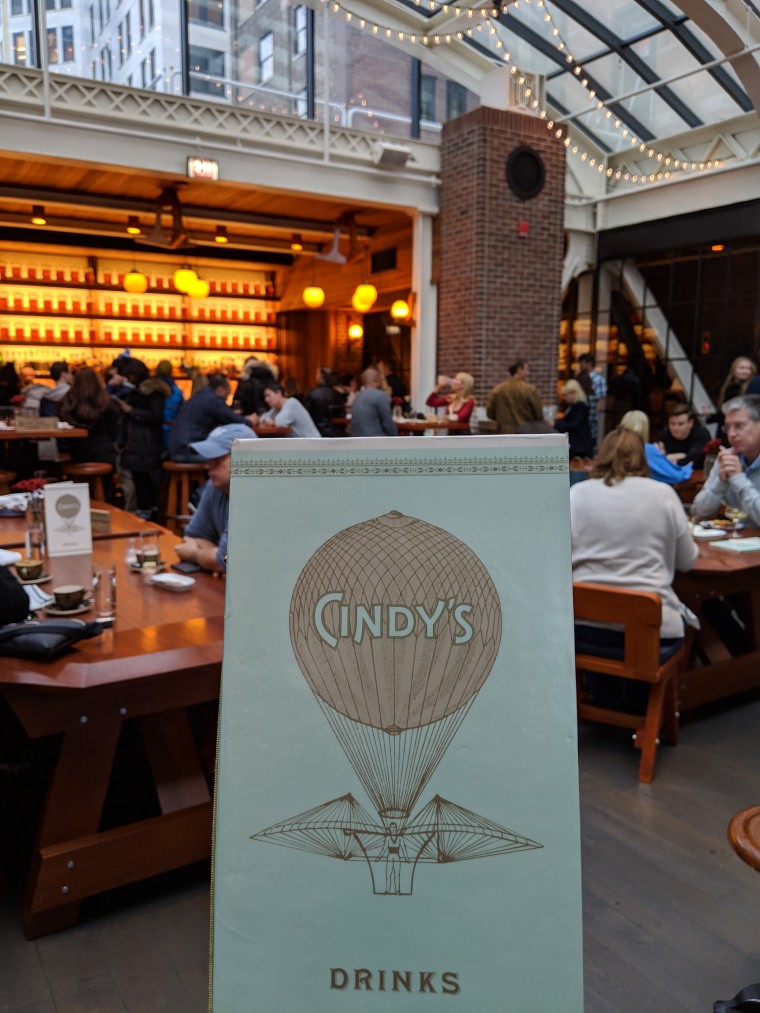 Like I mentioned, Chicago is a reservation city! (Which I actually prefer because, based on my experience, they do sit you within five minutes when you have one – unlike California where reservations don’t really mean anything.) It was still early but I knew we had to figure out dinner. Mike did some Googling and found this place called The Deerborn, which was recommended to us (by the big G) because it was “similar to OCK” (our favorite restaurant at home). Let me just say, Google can have ALL OF MY DATA just for this recommendation alone.

I don’t know enough adjectives to rave about this place with due justice.

In classic Ashley and Mike form, we ordered a few things to spilt. Starting with the French onion soup (which we now want to make at home) and the mezze platter, that included dolmades, hummus, tzatziki, babaganoush, and the best flatbread to soak up all the dips in. It was basically my dream … on a platter.

To be sure we were nice and full, next we ordered the mac and cheese and maple fried chicken. I’m salivating just thinking about it. Also, we’ll be saying screw it to the turkey next year for Thanksgiving. We’re making maple fried chicken (and mac n cheese, and an epic mezze platter, and onion soup).

On Saturday we walked to a cafe nearby to caffeinate for the day. My go-to, to-go order is an almond milk cafe au lait and, as to be expected in the magical city of all good food and drinks, wasn’t disappointed once. I’m also a huge almond milk snob and ask to see which one they use before placing my order soooo double points to Chi-town. 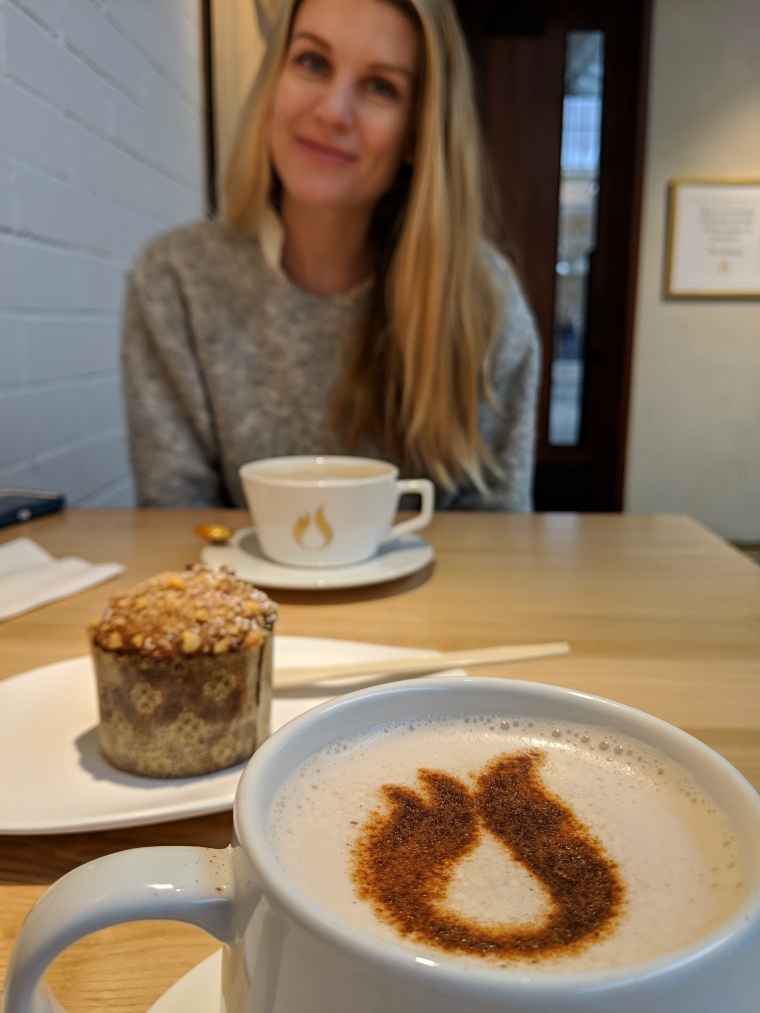 Next we decided to bear the rain and hit up the Christmas market. What a mistake! We didn’t even do a full loop before we left and sought shelter in the mall nearby. Ok it was time for pizza. DEEP DISH PIZZA. 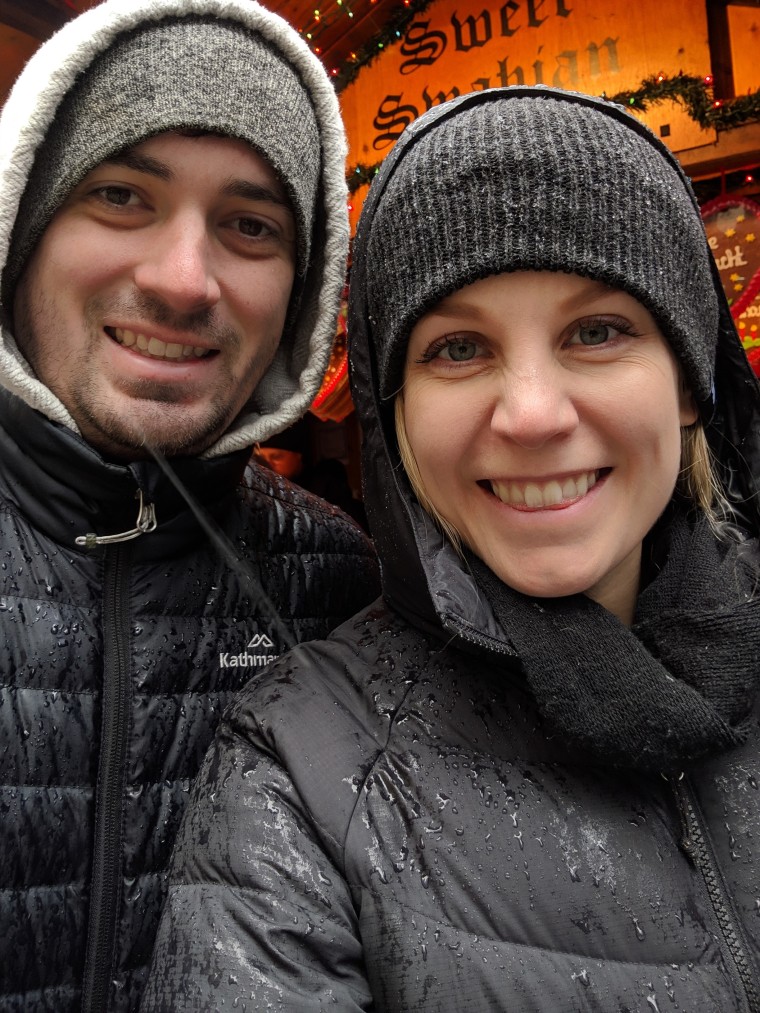 Everyone I asked recommended I go to Lou Malnati’s for the best deep dish in town. We got there around 11:30am and I’m glad we did! It takes about 40 minutes for them to make your pizza (which is expected for deep dish) but when we left, the waiting area was packed.

We ordered a pie with spinach and mushrooms, despite the menu mentioning it isn’t truly deep dish unless there is sausage on it. Which I can say, I wholeheartedly disagree. Our pizza was deep-dish-delicious sans sausage. It was ooey and gooey and buttery crusty. Oh, and the tomatoes on it. Perfection in every bite.

Ok, we’ve made it to the part of the  program that I am going to stop talking about how frickin’ good all of the food was and tell you my favorite part of the trip (if you can believe it wasn’t the noshes).

The Paper Machete at Green Mill was recommended to me by a colleague. When I was bummed that Second City tickets were sold out, she told me to go here and to be early!

The show starts at 3pm. We got there at 2:07pm and snagged the last open table by the stage. One beer for Mike. One martini for me; gin please.

The band rehearsed. I complained about how loud it was (I have v sensitive ears) and started to wonder if this was really the best use of out last afternoon in the city…

The showed started and before the first act was over, I knew. I knew it was going to be real good and real raw. I was ready for the ride.

The Paper Machete was a 2 (ish) hour live magazine where performers acted out various current events. The first was a monologue my the First Lady, Melania; so good and so funny and such a relief to know most of the audience was Democratic.

There was also a pianist, a trio of female singers, a few other skits sprinkled in between, and the headlining band (which I still think was a little too loud but it was fine). Mike and I were belly laughing almost the whole time. I also fanned out at the end and asked to take a picture with the girl band (one of the members had already gone home though, boo!).

Buzzed (from both the martini but also creatively from being around such talent) we left hungry and ready for dinner. Remember when I said Chicago is a reservation city? Well, we didn’t have any for dinner that night. Whomp, whomp.

We tried a few places near the hotel but most had a 2 hour wait. A little defeated we walked up the stairs in the SoHo house to the Chicken & Farm Shop. They sat us immediately and I was nothing short of suspect… Why wasn’t there a wait?

I still can’t answer that question because um, this place was reason enough to go back to Chicago. We ordered the collard greens, chicken nuggets, mac n’ cheese, and the best burger I’ve ever had that was infused with bone marrow that should be how all burgers are ever made…!

On our last morning in Chicago, we got ultra touristy and went to the Skydeck. Basically we stood in line for 1.5 hours and paid $50 for 60 seconds in a glass box 110 stories up.

I was a little nervous I would be scared to step out onto the glass floor, but felt so rushed I didn’t have to think about it. We shared the box with another party and we were both trying to cram as many pictures in one minutes as possible. It’s actually pretty chaotic. I wouldn’t do the Skydeck again but it was worth trying something new!

After that, it was a wrap. We hurried back to the hotel to pack, hit up Ballast Point for one last pint, and we were on our way to the airport.

Chicago, you stole my heart (my stomach and my skinny jeans). I can’t wait to see you again.