I can still remember the first time I had fried rice. I was probably 10 years old and my best childhood friend, Abby, had her birthday party at Benihana. I had never been to Benihana before. In the car on the way there she excitedly told me I had to order the fried rice.

I didn’t think much of it at the time. I ordered the fired rice. I watched them chop all of the veggies quicker than I thought possible. They poured oil on the hot cooking surface. Eggs cracked, yellow and white plopping and immediately sizzling. White rice was shaped into a heart that the chef made beat beat beat with a spatula.

Shortly after, a bowl of this fried rice was in front of me. I quickly scoped a bite in my mouth and holy! I don’t think I had ever tasted something so delicious.

Benihana fried rice is still a favorite of mine. This recipe is a little healthier – made with brown rice instead of white and probably about 1/2 the soy sauce – but it’s just as scrumptious! It brings me straight back to those childhood days.

I cut all the veggies for this earlier in the week when I had some extra time but you can easily prep everything right before and still have a healthy, satisfying dinner in less than 20 minutes.

Note: the rice I use isn’t the most cost effective (buying in bulk would be way better) but it saves time and I love the taste. I also omitted the egg and added shrimp instead.

Pro tip: sesame seed oil is a total game changer. I used to make fried rice without it and it never turned out as good as I wanted it to be. I’m telling you, just a few teaspoons of this stuff and you’re next level. 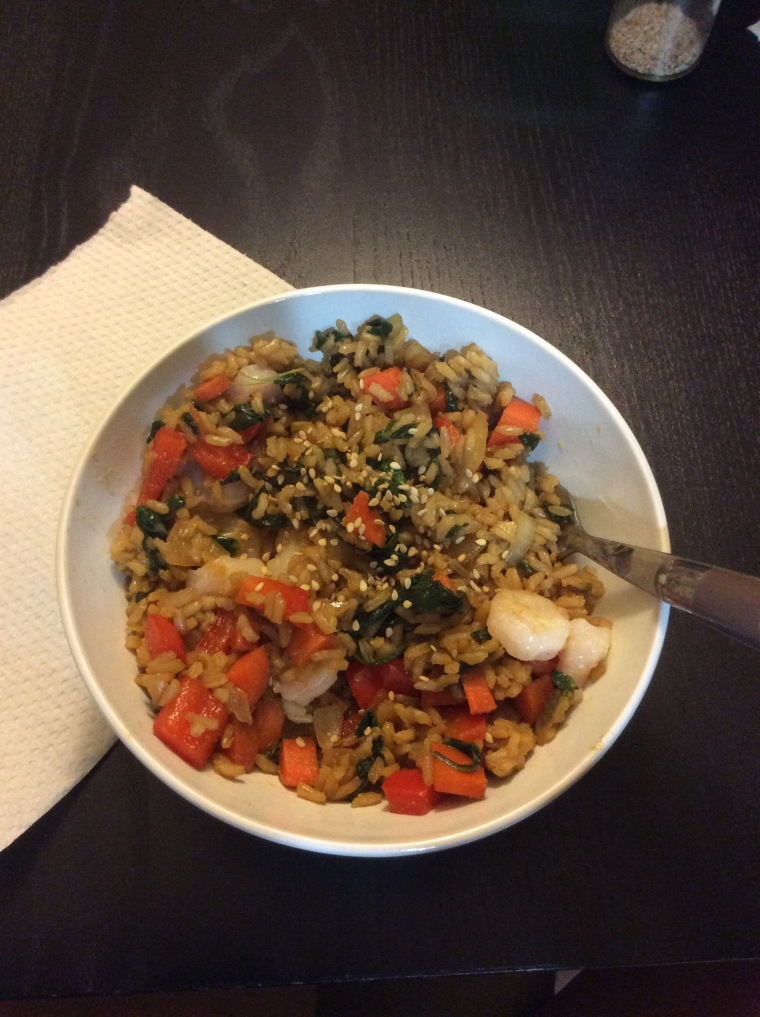 Garnish with seaseem seeds and pretend you’re at Benihana (without a single dish to do after dinner….!).

PS. technically I didn’t post a recipe last week, as promised. However, I did still make something (after an importune dinner and drinks with a few girlfriends). I turned to the Oh She Glows Every Day cookbook* and whipped up Golden French Lentil stew. I ended up freezing the whole batch but it looked and smelled so good. I can’t wait for the next chilly night to heat it up!

I also didn’t modify the recipe much (aside from omitting the cashew cream and using red lentils instead of green) so figured a picture of the actual recipe (below) would suffice. (I know, I know… laziest blogger ever;)

*My good friend Morgan (you can find her guest blog post here) bought this cookbook and tried out a few recipes, writing notes and her modifications on the pages (the pink writing above). I took it home in October after I visited her and tried a few recipes myself, adding my notes to the columns. Soon, I’ll mail the book to our other veg-loving friend, Melissa, for her to do the same. (Like Sisterhood of the Traveling Pants but with a cookbook… ya dig?)