What a fun city to spend a weekend in; particularly a bachelorette party! 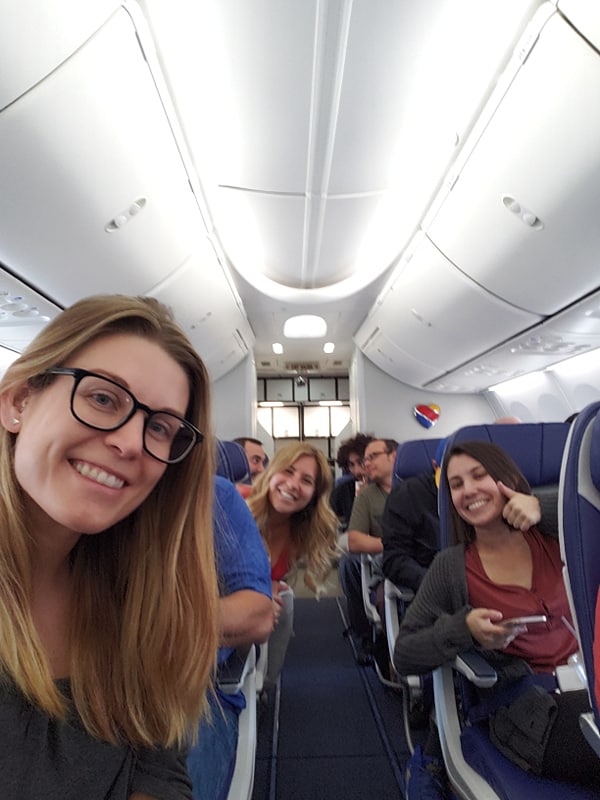 A few girls from California flew out to meet a few girls from the east coast in New Orleans. We were all there to celebrate one special lady, Lauren, and her “last fling before the ring.”

I flew out with Lauren, her sister, and our other friend – who is also named Ashley – early Friday morning. After a minor detour to Mississippi for gas, due to a thunder storm above the New Orleans airport when we were landing (major oversimplification but whatever!), we arrived in the late afternoon. We had about a hour to hustle and get ready before dinner with the whole group. 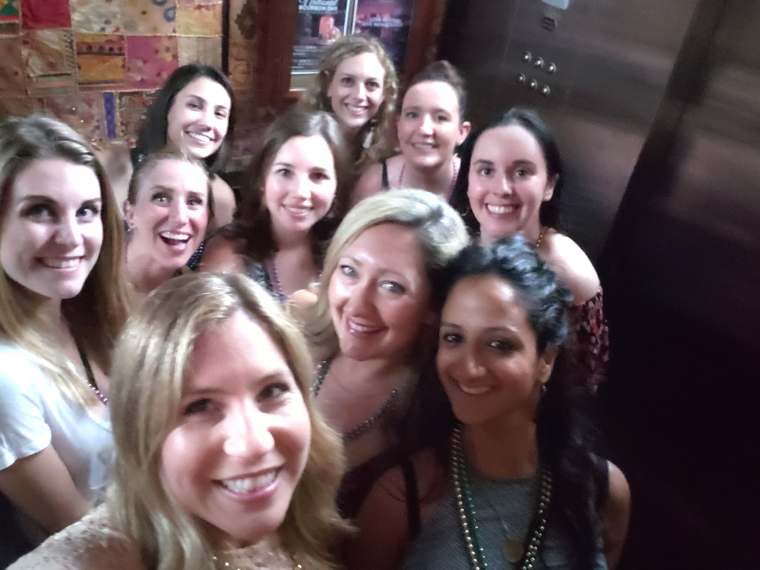 Although we didn’t stay directly in the French Quarters, we were a quick walk from there at the J.W. Marriott. We were at Red Fish Grill in less than 10 and bottles of wine were already waiting there for us from the sweet bachelor himself (thanks, Ian!). In retrospect, I wish I ordered something distinctly Southern, like the redfish or jambalaya, but I opted for the sugar cane glazed chicken instead. Which was good (!) but doesn’t seem too authentic…

New Orleans is like Las Vegas and you can walk around with alcohol. Which was lucky for us because we had leftover wine. We were given some to-go cups and hit the mean streets of NOLA with our wine in tow.

First stop was the Carousel Bar which was, sadly, underwhelming to say the least. Looking at pictures online, it must have been broken (or something?) because I remember it being a dark bar with barely moving seats.

To compensate, we took a whole bunch of bathroom pics. As you do. 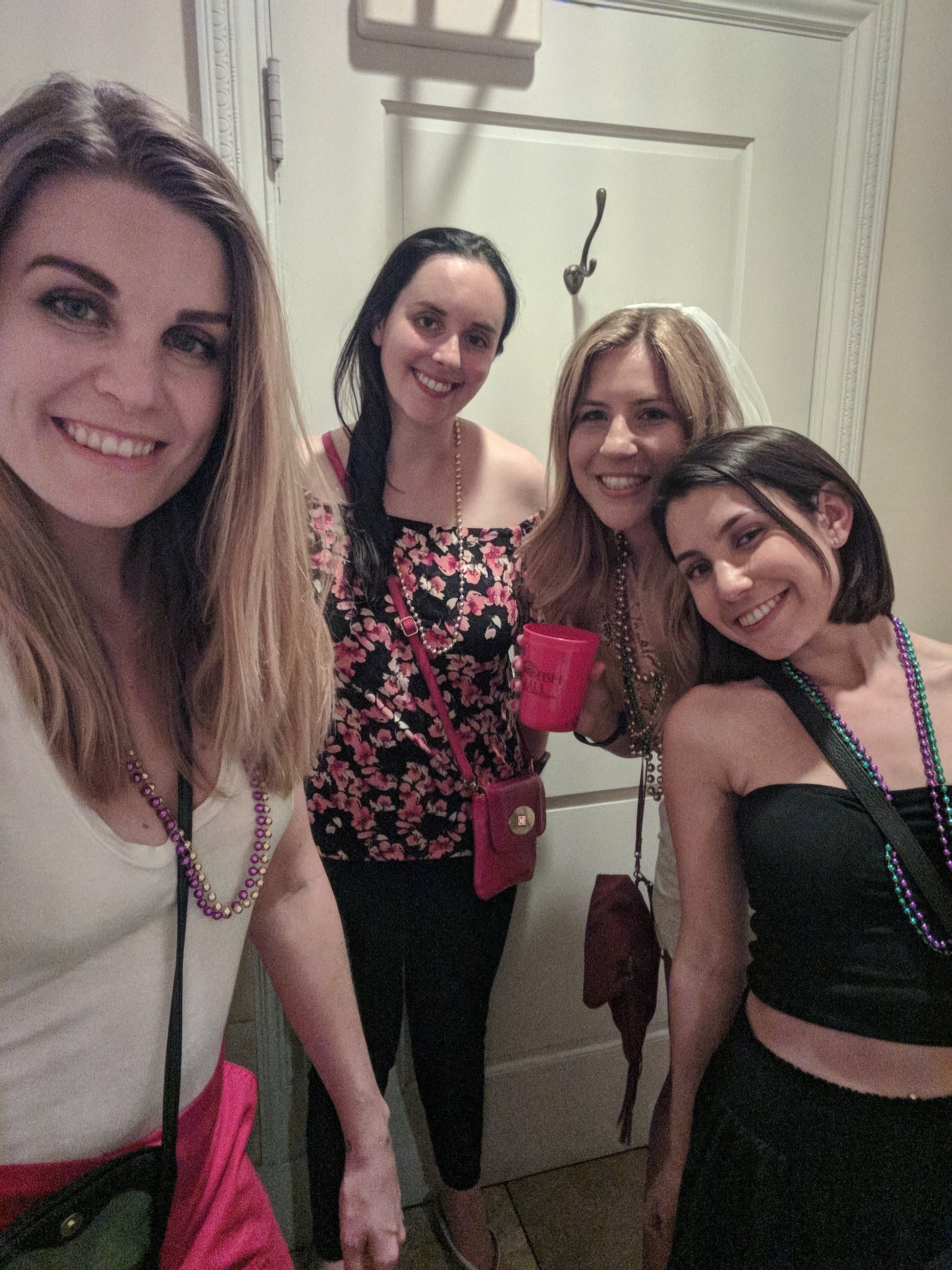 We hit up a few bars after for some shots and light dancing but the evening came to an abrupt halt when someone STOLE a member of our party’s wallet! UGH.

We filed a police report and headed back to the hotel. (Full transparency, we also stopped at a McDonalds on the way back and I ate a large fry with BBQ sauce… guess I won’t be going for 2 years of NO FAST FOOD after all. Hah)

The next morning we had brunch at the iconic Brennan’s. If you’re a fan of banana’s foster – and I didn’t know I was until I tried it at Brennan’s – this is the place for you; BECAUSE it was invented there. And, well, it’s delicious. 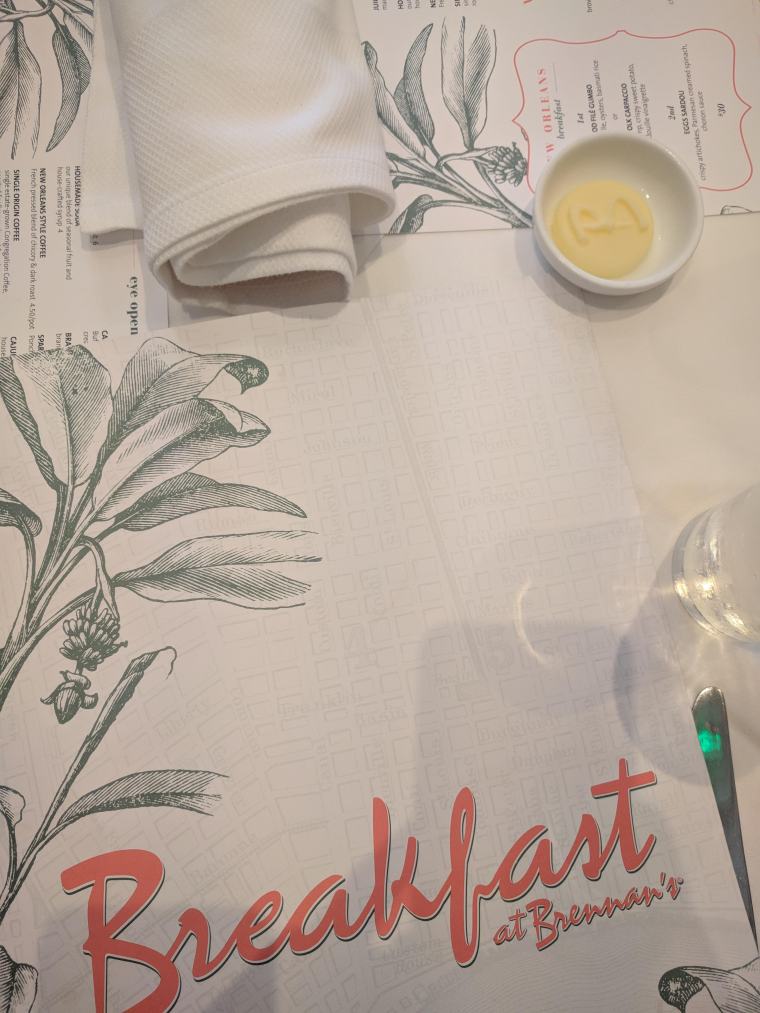 Brennan’s was good and it was cool to eat there but the service was sloooow. Despite the 3 hours we spent there (!) I would recommend trying it out. If only because it is such a part of New Orlean’s history. I later watched a documentary about Ella Brennan on Netflix that I also recommend!

Also, side note, the coffee in New Orleans… next level. I loved the chicory in it and snagged a few bags to enjoy with my Grandpa in San Diego at the end of the month and my in-laws when they are in town for the 4th. 🙂

(Mike isn’t a coffee drinker! …is chicory tea a thing?)

After brunch, my close friend Leslie and I went on a cemetery and garden district walking tour. We went through the company Two Chicks and our guide was great! Plus, it’s a company owned by 2 women, so happy to support.

We started in the cemetery where we learned that it is a common misconception that the graves are built above ground because New Orleans is under sea level. Basically the sea level issue is a minor reason for above ground tombs and it has more to do with space than anything else. 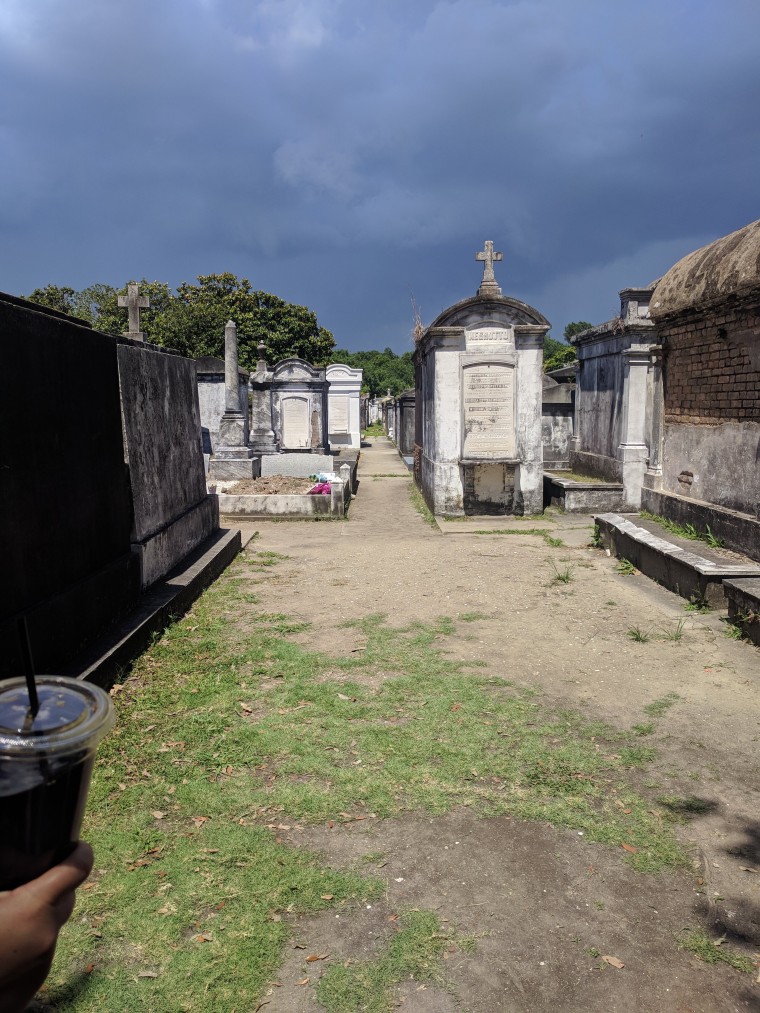 When a family member died, they were placed in the tomb and given a year and a day to decompose. After they hit the year and a day milestone and when the next family member died, the tomb would be opened and the remains of the already decomposed would be placed in a mesh bag and stored in the back of the tomb. This process repeated itself and allowed for a lot more family members to be buried in the same space, as oppose to a whole tomb for every person. Instead they all shared; fully decomposing together.

And for that person wondering – what if a family member died before the year and a day cutoff for the tomb to be re-opened? – families could rent a wall vault in the interterm.

Another interesting thing we learned was that many bodies actually ended up being stolen by medical students so they could examine them. Creepy.

Next up was a stroll through the gorgeous streets on the garden district. Celeb house sighting included!

After 2 hours of walking in humid weather, it was time for a drink and some apps! Les lives in Nashville and I don’t see her as often as I would like to 😦 so it was nice to catch up a little bit. 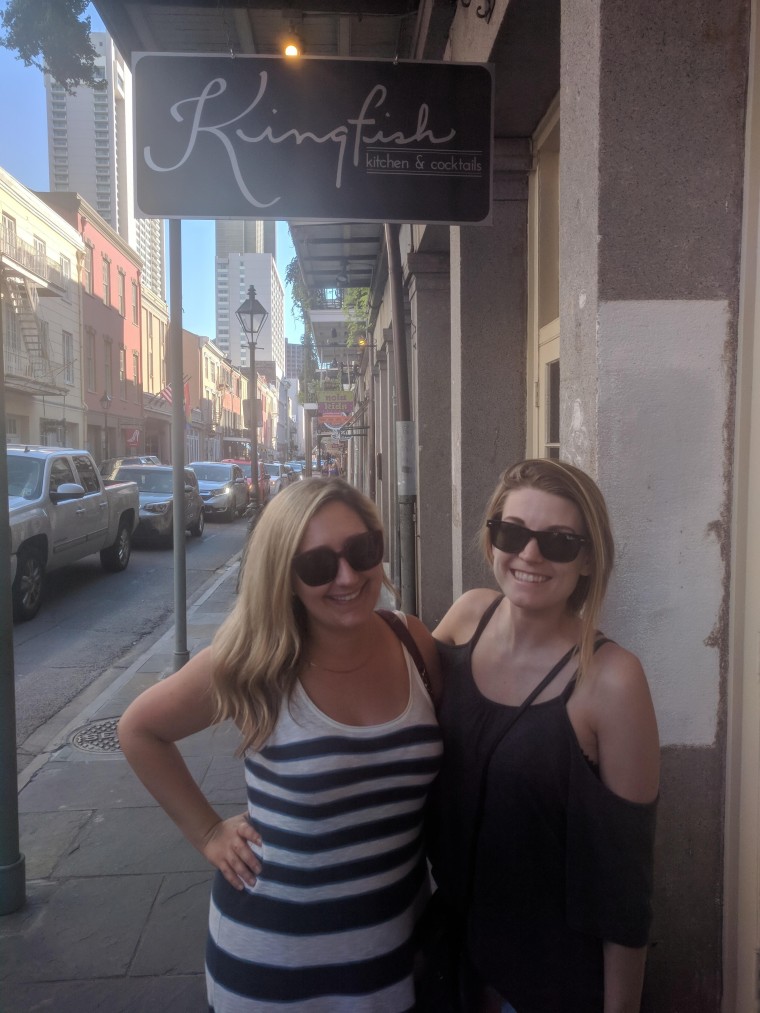 We hurried back to the hotel after to get ready for dinner at , which was another 3 hours btw (Southern dining!) hahah. I can’t complain though; the laughs were effortless, the food was delicious, and the drinks were flowing.  Also, a huge thank you to the bride-to-be’s parents who generously picked up the tab!

After dinner I think we were all walking the line between, crash back at the hotel or RAGE. I’m happy to report we decided to saunter over to Razoos to get down.

…That morning I woke up and was like, no shots. When we walked into Razoos, Leslie and I immediately took 2 shots and bought one for the bachelorette. Because that’s how bach parties go.

Suffice to say, the night was dance (and vodka) filled. It was also Pride Week so everyone was in festive, happy spirits.

After another run in with fast food (NOT SORRY, I WOULD HAVE BEEN SO HUNG OVER WITHOUT IT), we were back at the hotel.

On Sunday morning the general consensus was beignets and “byyyyyyeee.“ New Orleans was a great time but it was time to go home.

We gathered our beads, dumped out the last of the bubbles, popped the unmentionable balloon decorations, and filled up on caffeine and airport burritos to fuel us back to California. Until next time, nola! ✌️ 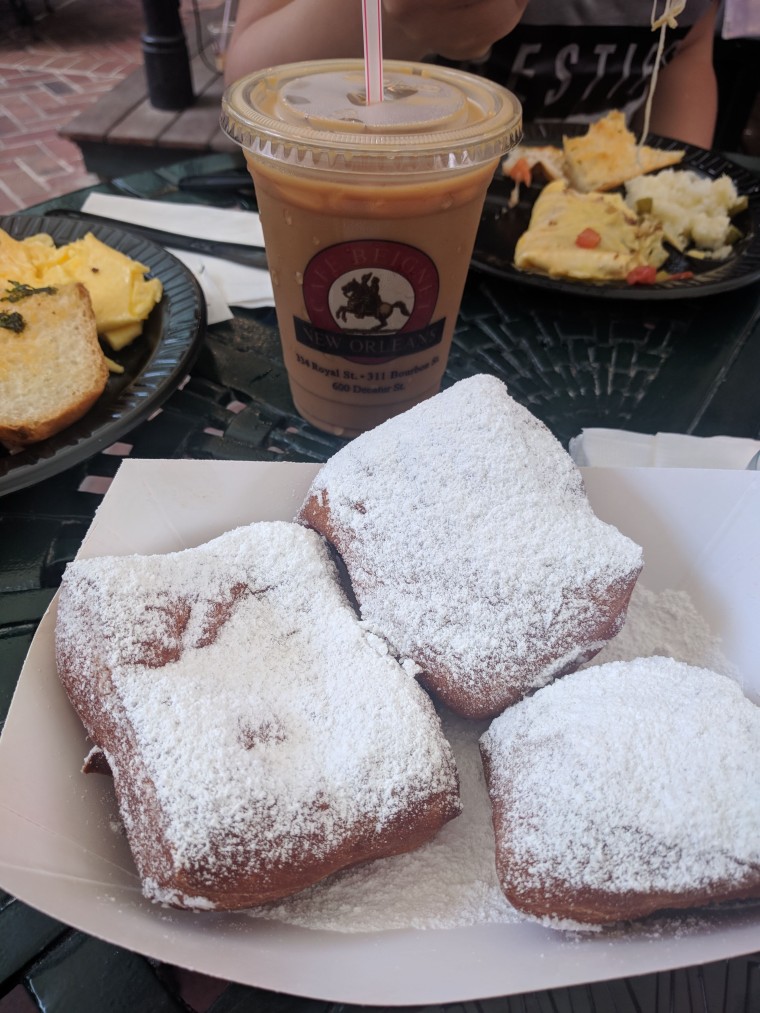 One thought on “Beignets & booze ”